‘We shall return’: elections, anxiety and prophecies in northern Kenya

Hassan Hussein Kochore writes about a ‘we shall return home’ narrative gaining traction in parts of northern Kenya. People are looking north to a post-Meles Ethiopia while worrying what the 2013 Kenyan elections will bring. 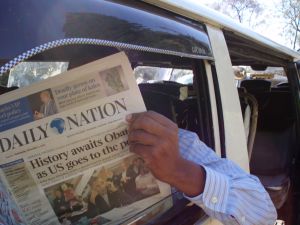 In his seminal work on nationalism, Imagined Communities (1983), Benedict Anderson suggested that a feeling of national community is produced by the knowledge that all over the nation people are performing the daily ritual of reading the same newspaper.  This idea is best captured in the name of our own Kenyan newspaper, the Daily Nation.  In Nairobi, one can take for granted the ease with which a newspaper can be obtained from the supermarket, roadside vendors, and hawkers in traffic jams or even by borrowing it from a fellow passenger in a matatu. Many matatus these days actually have a copy of the day’s paper and if you’re lucky enough to sit next to the driver, you can monopolize it. By the time you get to your destination, you’ll have read the whole paper for free!

Then picture a place where a newspaper is hard to come by, a place where you can only ever buy yesterday’s paper, asking a shopkeeper on a Monday morning, “Nipatie Sunday Nation ya leo.” (Give me today’s Sunday Nation). Welcome to Marsabit County in northern Kenya, the nation’s ‘B-side’. Northern Kenya has historically been marginalized, closed off from the rest of Kenya and development actors like the churches. It was only after independence that the Catholic Church, for example, was allowed to build schools in Marsabit. Roads are almost non-existent, with heavy trucks – the most popular means of transport – carving out new roads for themselves every few days in the sandy landscape. It still takes two days riding on the roof of a truck to get to Marsabit from Nairobi. END_OF_DOCUMENT_TOKEN_TO_BE_REPLACED

Comments Off on ‘We shall return’: elections, anxiety and prophecies in northern Kenya

Somalia’s ‘Constructive Elite’ and the Challenges Ahead

Laura Mann reports from the first event of the Rift Valley Institute’s Nairobi Forum for Research, Policy and Local Knowledge – ‘A Somali Spring?’ A link to the podcast can be found at the end of the post.

On October 11th, the Rift Valley held its first ‘Nairobi Forum’. They invited Ken Menkhaus, Amal Ismail, Jabril Abdulla and Matt Bryden to discuss the post-election climate in Somalia. The former Kenyan ambassador to Somalia, Mohamed Abdi Affey, who was chairing the proceedings, joked: “We wanted to show Kenya what it means to be a democratic nation”.

All parties agreed that Hassan Sheikh Mohamud is a man who combines two clean hands with enormous street cred. There is reason for ‘cautious optimism’ even amidst the challenges ahead. Ken Menkhaus argued that it was not the election of this single remarkable man that was important, but the extensive support network behind him. Describing this network as a ‘constructive elite,’ Menkhaus clarified that this was not a mass uprising ‘Somali Spring’ but a civic mobilization of determined professionals tired of warlordism and ineffective foreign interventions alike. These individuals have been on the ground for the past 20 years, building hospitals, schools, universities and private businesses. They have spent the past 20 years “navigating the streets” as Ken Menkhaus put it. They have learnt how to negotiate deals with difficult parties, how to build trust across clans and most importantly, they know how to get things done. Jabril Abdulla added that these negotiating skills are important. The gradual expansion of the state will not just involve institutions, but people, some benign and some less palatable. Getting warlords to engage in politics is one of the key challenges.

Abdulla added that while elites had gotten him elected, there was nonetheless widespread public support behind his victory. He described how the public ‘legitimized’ the election by broadcasting the news on radios and televisions during the week following the election. However he also cautioned that there were some regions that did not share in the jubilation.

Nevertheless, as each of them said in turn, there is reason for cautious optimism. END_OF_DOCUMENT_TOKEN_TO_BE_REPLACED