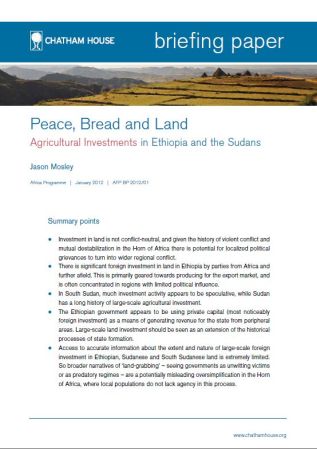 Earlier this year, I presented a report to the Horn of Africa seminar at Oxford University, which explored some of the implications for security of large-scale investment in Ethiopia and Sudans. Although good data on the amount of land leased, the terms of the leases and the state of any investments is extremely difficult to find, it was possible to discern some possible trends. For Ethiopia, among the more significant trends was that large-scale land deals (involving both foreign investors and domestic) were situated along Ethiopia’s peripheral areas — politically and geographically speaking.

I was seeking with the report to move beyond oversimplified narratives of ‘land-grabbing’, to get at some more useful insights about motivations and political context. In Ethiopia’s frontiers/peripheries, relations with the central government are still in the process of being defined. Moreover, Ethiopia’s frontiers have played a long and significant role in the country’s political economy: as a location to escape central authority, and also — most recently — as the base of the revolutionary movements that overthrew the state and took power in Ethiopia (and Ertirea) in 1991.

As such, one of the concerns I raised in the report was whether, by aggressively courting commercialisation of land use — along with attendant impacts such as resettlements of local populations out of leased areas — the Ethiopian government would be risking stability in its frontier areas. Those regions — including the federal units of Benishangul-Gumuz, Gambella, parts of Southern Nations, Nationalities and People’s Region (SNNPR), Oromia, Afar Region and Somali Region — already host more and less active anti-state insurgencies. Moreover, there are numerous local level conflicts, some of which are of significant scale and may involve cross-border activities and population displacement. As such, large-scale investment in land in Ethiopia’s frontier areas cannot be a conflict-neutral prospect.

A further concern was whether existing anti-state groups would start to instrumentalise such investments, as justification for their campaigns. Rhetorically, this has already started to happen. However, on April 28, five farm workers were killed and eight wounded in Gambella. Those attacked included five foreign nationals (Pakistanis), including one of the dead. The attack prompts the question of whether we are seeing a significant shift in the dynamics of large-scale land investments in Gambella, or Ethiopia?

Attention to Gambella’s security-land nexus is increasing. The April attack took place near a large-scale farm run by Saudi Star, 10,000 hectare concession which is growing rice. Saudi Star is part of the business empire of Mohamed Hussein al-Amoudi, a Saudi-Ethiopian national, who is a dominant player in many sectors of the Ethiopian economy. The involvement of South Asian workers also evokes Karaturi, an Indian firm which holds Ethiopia’s largest reported concession — some 300,000 hectares, 100,000 of which have been allocated, also in Gambella. The firm’s concession has been the subject of much of the media attention to ‘land-grabbing’ in Ethiopia.

However, in this case, the workers don’t appear to have been involved with Karaturi’s project. It does not appear to be a straightforward case of targeting foreign nationals; rather, Ethiopian nationals bore the brunt of the attack.

Moreover, recent events in Gambella suggest that the attack may not be directly (or only) related to the question of land investments at all:

In March, unidentified gunmen attacked a bus just outside Gambella town, killing 19 passengers. No responsibility for that attack has been claimed.

During the last year, events across the Sudanese border — including ongoing clashes between Sudan’s army and Sudan Peoples Liberation Movement-North insurgents in Blue Nile state — has seen tens of thousands displaced into Ethiopia, including into Gambella.

Underlying this, there is a long-standing pattern of instability in Gambella related to the demographics of the region, which are heavily influenced by population movements across the Sudan/Ethiopia frontier. In its simplest form, this boils down to ethnic Anyuak sensitivities to ethnic Nuer population trends. Anyuak leaders say that many Nuer are really Sudanese refugees, and complain that their ‘falsely’ inflated numbers have given them undue influence over the region’s politics, as structured under Ethiopia’s ethnic federal system. This case is oversimplified, and overlooks the mobility of ethnic Anyuak across the border. Another layer of the region’s tensions relates to long-standing settlements of ‘highland’ Ethiopians in Gambella, a product of past resettlement and plantation schemes.

Within this sensitive mix, an increase in instability seems more expected, given recent events in the Sudans and the displacement effects. The Ethiopian government is sensitive to suggestions of instability in this region, which is highly fertile and a major plank of its drive to promote investment in commercial agriculture. It has denied reports of Anyuak displacements into South Sudan due to instability in central Gambella.

This suggests to me that we should expect further low-level instability. However, it seems at present that land-investments are not the target of violence, but rather caught up in — and even to some extent exacerbating — existing triggers of insecurity.

Further reading:
Dereje Feyissa. 2010. ‘More State than the State? The Anywaa’s Call for the Rigidification of the Ethio-Sudanese Border’. Chapter 2 in, Borders & Borderlands as Resources in the Horn of Africa. Dereje Feyissa and Markus Virgil Hoehne, eds. Oxford: James Currey.

5 responses to “Gambella violence and land deals: a link?”